You are using an unsupported browser. Please update your browser to the latest version on or before July 31, 2020.

We have already talked about the SSH Server Key, which is used to verify the server’s identity and to negotiate the security (hmac/encryption) parameters. In this article, instead, we want to explain  how to use PKI to authenticate users in Syncplify.me Server!

First of all, it is important to understand that – unlike Server Keys (or Host Keys) – these user-specific key pairs are not used for encryption, but only and exclusively to authenticate users, thus verifying their identity and decide whether to let them log into the server or not.

Authenticating users via PKI certainly grants a much higher degree of security than simply using a password, and is, therefore, a highly recommended authentication method.

Method #1: user-generated key pair (recommended)
To ensure the highest degree of protection for the user, and prevent the potential loss of the private key, it is  highly recommended that the user generates the RSA key pair (both private and public key) and then sends only the public key to the server operator.

This can be done with the following shell command on a Linux client:

Or, in Windows, it’s easily doable using the excellent PuTTYgen tool, as shown in the images here below: 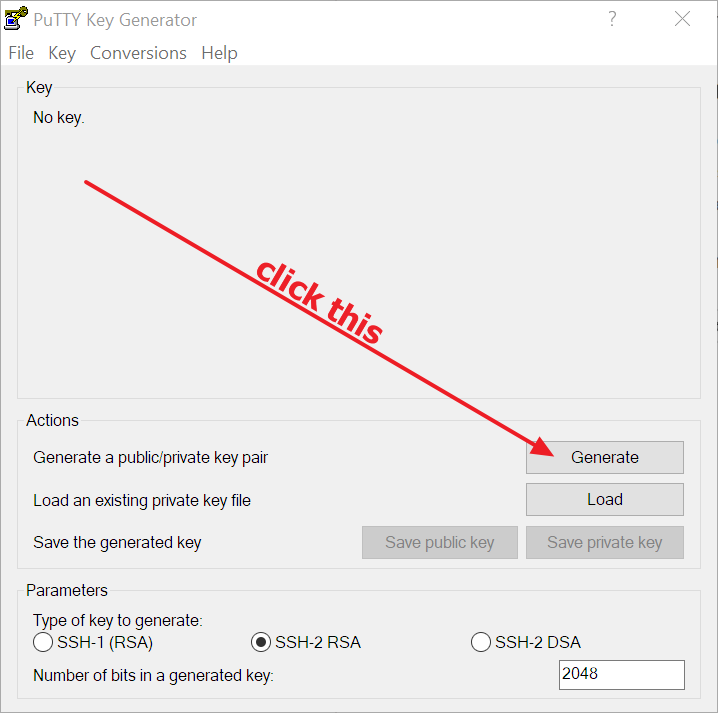 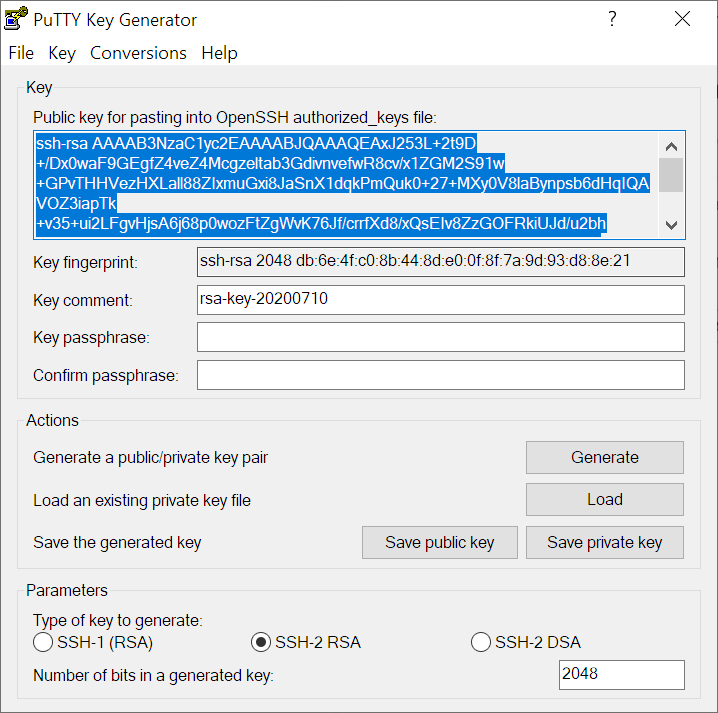 Regardless of the OS (Linux or Windows)  the user needs to save both public and private keys after they are generated, and:

Once the Syncplify.me Server! administrator receives the user’s public key, he/she will have to import it into the authorized keys for that specific user, and enable PKI authentication for that user profile, as shown in the pictures here below: 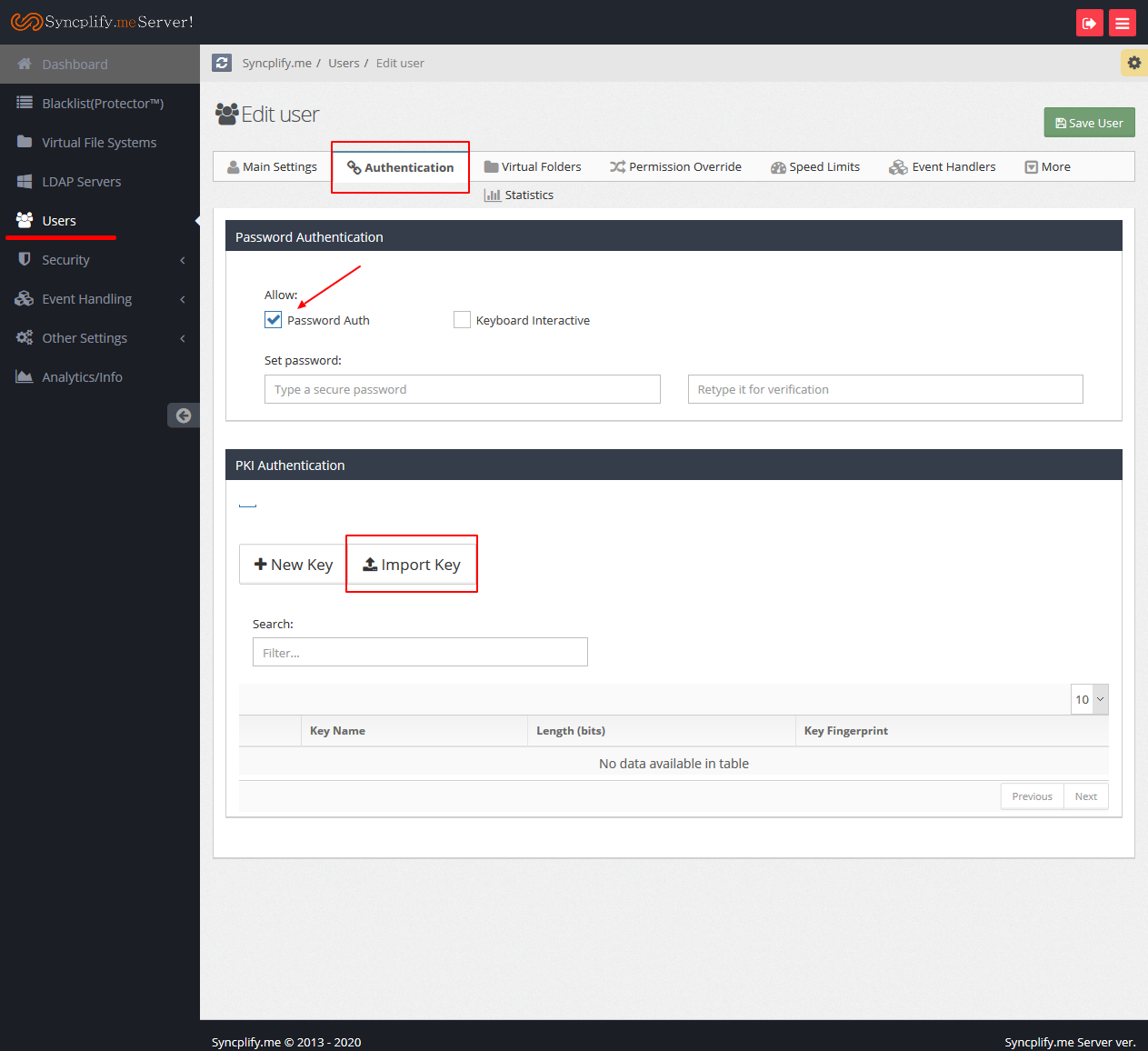 After importing the user’s public key, the Syncplify.me Server!’s administrator will simply save the user profile, and that’s it: the user can now authenticate and log in using his own self-generated key pair.

Method #2: server-generated key pair (not recommended)
Alternatively the Syncplify.me Server!’s  administrator can generate the key pair and send it to the user, while Syncplify.me Server! only retains (stores in its configuration database) only the public key. This method is not recommended because it implies the private key being sent over the network, which might be unsafe, but it’s much easier than the previous method, and it can actually be suitable and safe in closed environments (like when the key pair is given to an internal user or an employee) in a safe way.

In this case, the Syncplify.me Server!’s administrator will still need to enable PKI authentication for the specific user profile: 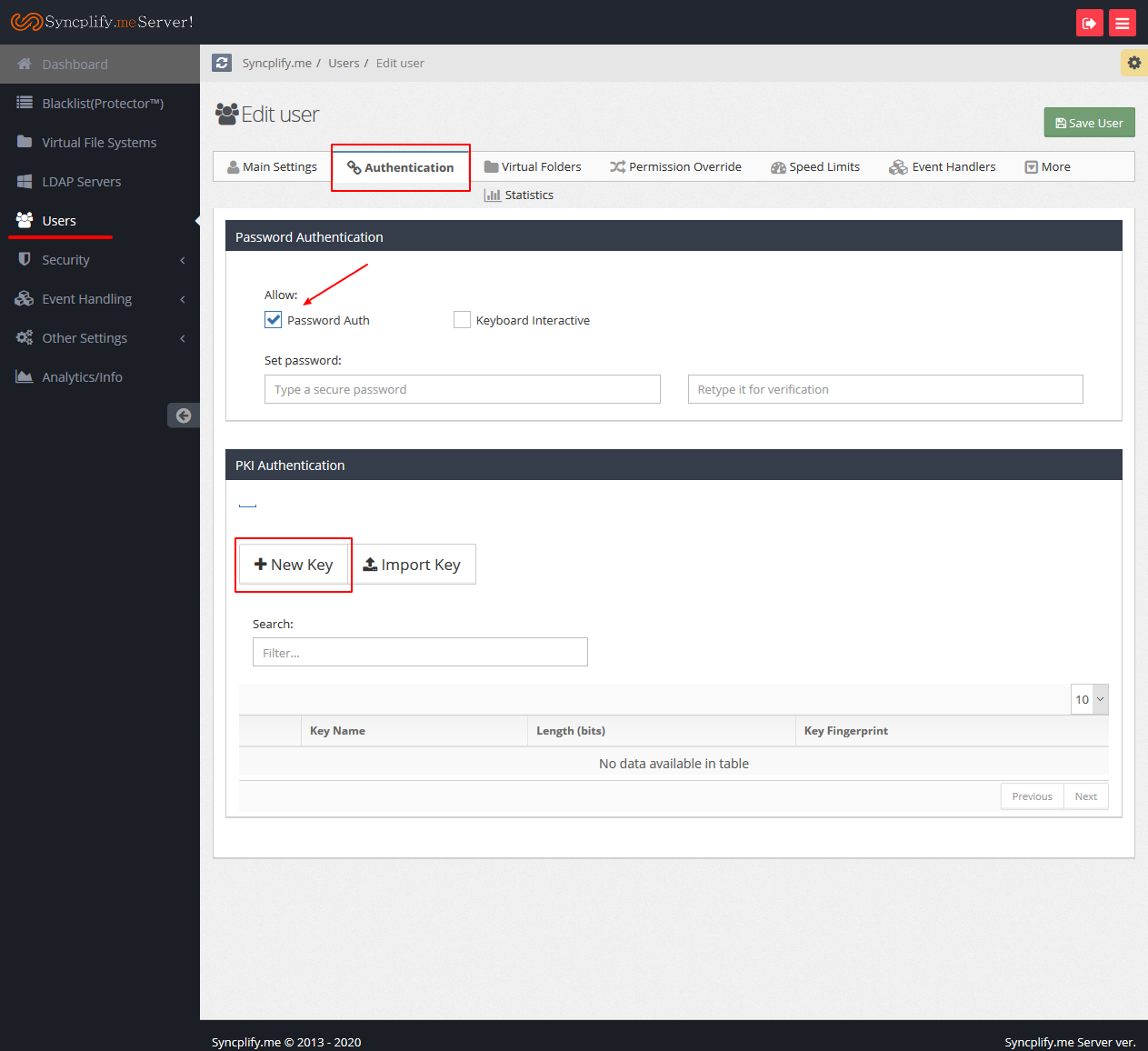 But then, instead of importing a key proceed to generate a key pair for the user:

Once done, the Syncplify.me Server!’s administrator will simply need to save the user profile, and send/give the generated PPK file to the user.

Feedback
0 out of 0 found this helpful